Last weekend, my housemate Katherine had a couple friends visiting from the States. Determined to give them a “true Irish experience,” I and another Irish friend of ours tagged along on a trip to the “Wesht” of Ireland.

We left right after work on Friday, and drove about 3 hours due west from Dublin, until we got to our destination: an AirBNB overlooking the sea in the small but full-of-character town of Lahinch, in County Clare: 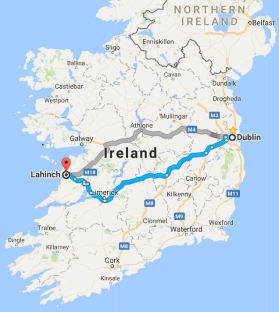 By the time we settled into our AirBNB and made into town for dinner, most of the Irish restaurants were closed, so we ended up eating at an Italian restaurant served by an extremely energetic waiter before heading to Kenny’s for a few pints.

Bright and early the next morning, we headed off to the town of Doolin, about a 20 minute drive north of Lahinch. The roads were surprisingly better than I had anticipated; the last time I had driven out in western Ireland, my friend and I bumped along on windy narrow lanes before ending up accidentally in the middle of a field of sheep – not quite our target destination.

Luckily for us though, the roads were actually paved, and even had a line down the middle to split them into two lanes; the biggest surprise (and relief) was that we didn’t see a single car coming the other way, which meant that I didn’t have to try to maneuver our SUV (which the Irish call a “Jeep” – turns out they call all SUV’s “Jeeps,” no matter their make or model) out of the way.

We planned to use Doolin as the launch spot for our visit to the Aran Islands, a group of three small but picturesque islands belonging to County Galway. Our plan was to visit Inis Mór (pronounced “INN-ish MORR”), the largest of the three and about an hour ferry ride from Doolin. However, as it turned out, there was a significant storm threatening the west coast and the ferries to Inis Mór were canceled.

Thankfully, there was still an option to go to Inis Oírr (which translates to “Black Island” and is pronounced “INN-ish EER”) in a 20-minute ferry ride, which we jumped on. We were warned that the initial part of the ride was going to be quite rough due to the sea conditions, and they were right; it was like a living roller coaster, which I loved! (Others did not love it quite so much – there was definitely puke in the bathrooms.)

We got to Inis Oírr around 11am, and rented cycles to do a man-powered tour of the island prior to our scheduled ferry departure of 2pm. Despite the initial bad weather on short, the weather on Inis Oírr was great – clear skies and [very] brisk winds. The first major sight was only about ten minutes into our route: The Plassey Shipwreck, which washed ashore in 1960. 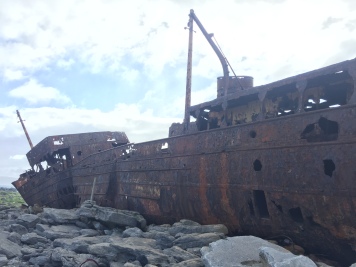 Our next stop was the very striking lighthouse located on the southern-eastern of the island. Sadly, the lighthouse was closed, but we still got a couple good pictures: 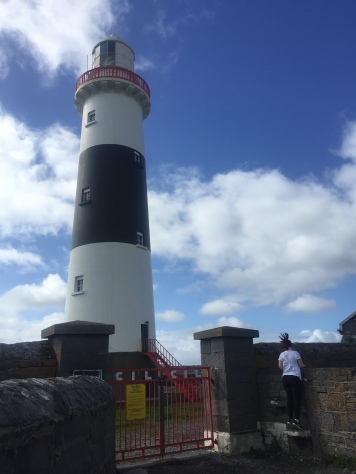 After that, we took our time tooling around the island, marveling at the great views and the intricate stone walls – of which there were many, many more than seemed absolutely necessary. 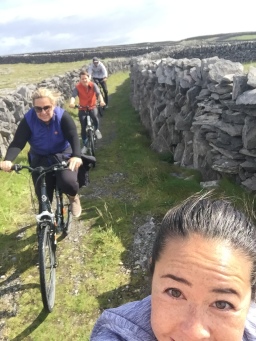 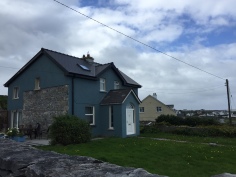 It’s difficult to capture the rustic, wild beauty of the island – you really have to be there to experience the wind, the sun, the smells, and the sounds. One of my favorite views, however, was undoubtedly the monument erected to memorialise all those who had lost their life to the sea:

We wrapped up our tour with a very steep climb up to the castle that perched on top of Inis Oírr’s highest hill, where we took selfies (naturally) and attempted to not be blown off by the high winds:

Once back on the island of Ireland (the ferry back was MUCH smoother), we grabbed lunch in the tourist-overrun tiny (literally a block long) town of Doolin, and headed on the road to the Cliffs of Moher. I’d been to the Cliffs once before a few years ago, and the only word I can think of to describe them is”breathtaking.” Luckily for us, the sun looked like it was starting to come out, so we sucked it up and paid our 6 euros (EACH!) entrance fee.

The Cliffs did not disappoint – although it was extremely windy, and I clutched very tightly to my phone during picture-taking! Here are a few: 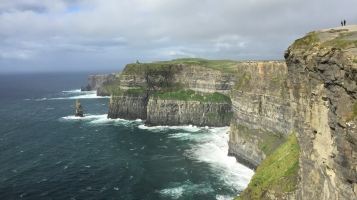 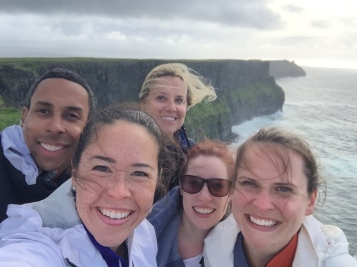 After a solid two hours (we walked about 3 miles, pausing every few minutes to take pictures!), we made our way back to Lahinch for well-deserved (and needed!) hot showers before dinner.

Unfortunately, we were unable to find any taxis to take us to the restaurant where we had reservations. (Travel note: it’s difficult to find taxis on the spot in rural Ireland, so you should definitely book them ahead of time.) This situation was complicated by the fact that there was a Matchmaking Festival taking place in nearby Lisdoonvarna (pronounced “liss-dunn-VAR-na”) – no joke. (I actually really wanted to go, as it is supposed to be quite good craic – but the taxi situation made it a bit impossible).

We ended up making it to the restaurant after all because one of Katherine’s co-workers actually came and gave us a lift (he lives right across from the Lahinch golf course) to Vaughans Anchor Inn restaurant in Liscannor. 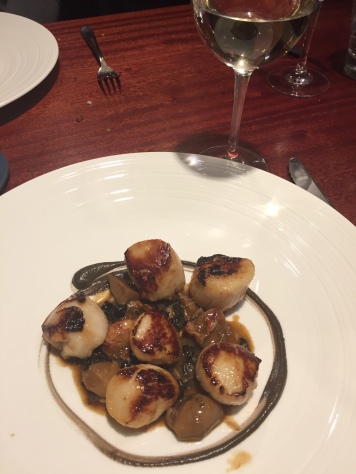 The food was superb, and after a very filling dinner we made our way to a couple of the pubs next door, one of which contained an odd mixture of teenage girls fresh from a Gaelic match, older people (50s/60s), and some people that we think were celebrating a 21st birthday party (based on the banners that were strung around). It was definitely a very Irish vibe, and we enjoyed being swept up with the crowd when the band played “N17,” a popular GAA song and an ode to the national road that runs from Sligo to Galway.

The rest of the night was spent back in Lahinch at the bar from Friday night (Kenny’s)and the surfer nightclub O’Looney’s – one of the odder places I’ve been to. Picture surfers with bleached blond, beachy hair, a large space with huge projector screens playing highlights of surfing prowess…and thumping nightclub music. It was unique, that’s for sure!

The next day, perhaps influenced by the “N17” song, we headed to Galway (about a two hour drive from Lahinch), to show the visitors another one of Ireland’s more charming towns/cities. (You can read more about Galway in a different post of mine, which I’ve yet to write…) 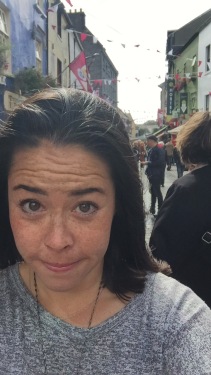 We wandered through the streets, said hello to one of our friend’s pubs, and enjoyed fish and chips from McDonagh’s – a Galway classic – before heading back to the pale. We were home by 7pm on Sunday – not bad for such a full weekend!

One thought on “Lend Me Your Oírr!”

This is a text widget, which allows you to add text or HTML to your sidebar. You can use them to display text, links, images, HTML, or a combination of these. Edit them in the Widget section of the Customizer.
Loading Comments...
%d bloggers like this: